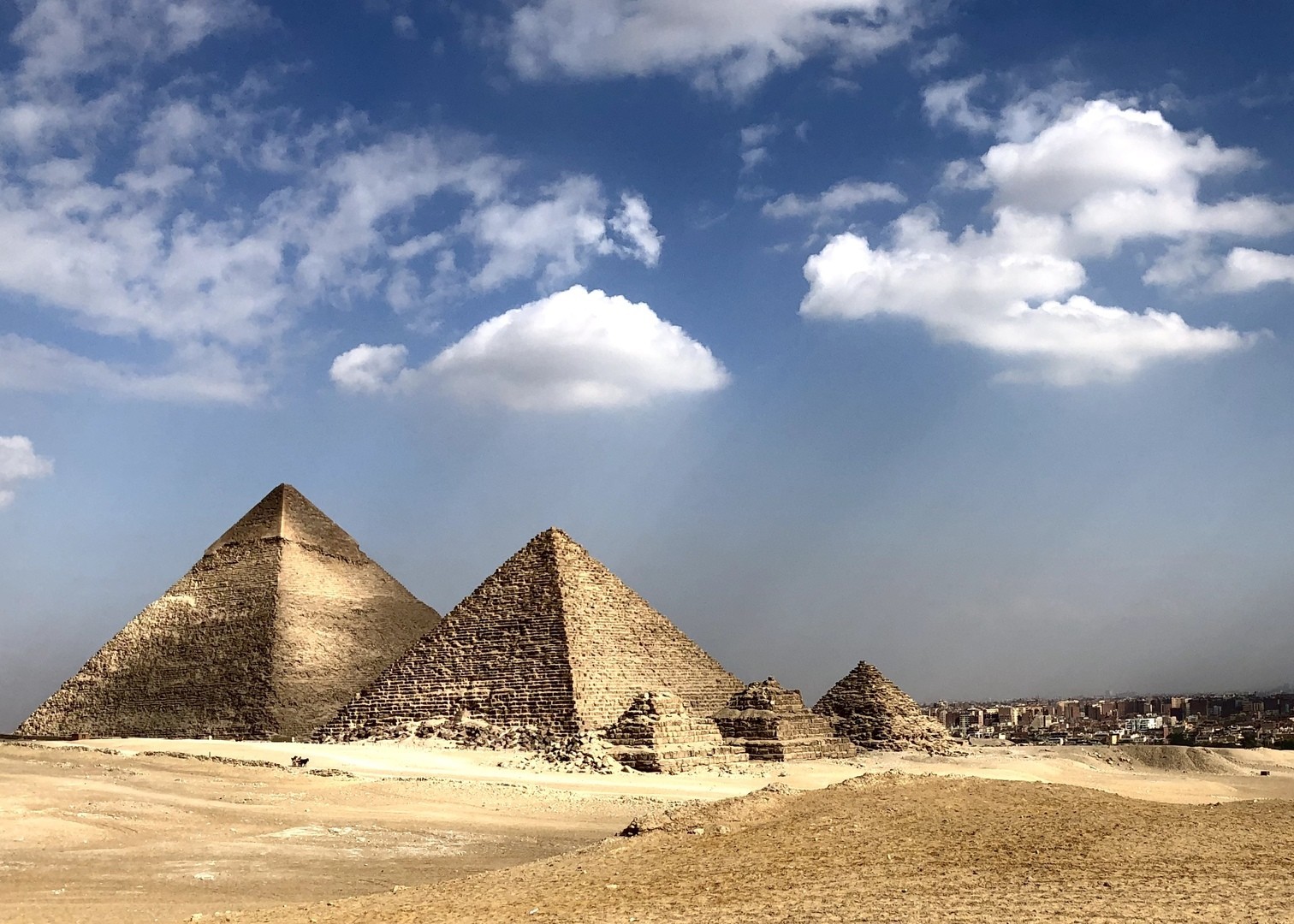 For 3,800 years, the Great Pyramid of Giza, built in 2560 BC, was the world’s highest man-made object. It is the earliest of the Seven Wonders of the Ancient World and the only one that still stands today.

While seeing the pyramids is a rather straightforward event, with little to do other than gaze at the massive mounds of sandstone, it is nonetheless a meaningful and unique experience that every visitor should tick off their list.

How To Reach The Pyramids

The Great Pyramids of Giza are located in the suburbs of Cairo.

You can book tickets to Cairo International Airport (CAI), which is offered by a variety of airlines, and then drive to Giza for an hour. There are numerous taxis in the arrivals zone, it is far less expensive and possibly safer as well.

Rent a car in Egypt only if you are comfortable with Middle Eastern driving! Traffic in Arab countries is dangerous and chaotic, and you are far better off traveling with a driver who is familiar with the local system.

Additionally, Egypt’s drivers are rather economical – as of 2020, the cost of an Uber ride between Cairo and Giza is less than 200 EGP ($10 USD).

If you plan to stay at least one night in Giza, you can leave your luggage at your hotel and then stroll to the pyramids and sphinx entrances.

There are several hotels in Giza that are within a 5-minute walk of the pyramids’ main entrance, and they typically feature fantastic rooftop views to boot. That will be discussed in greater detail later.

If you’re prepared to visit the pyramids, simply proceed to the main ticket office and purchase your tickets. At this stage, scammers and touts will be attempting to con you, but you should ignore them.

As of 2020, the general entry price is 120 EGP ($7 USD), which includes admission to the sphinx and the surrounding area.

If you want to go into the pyramids rather than just walk around and look at them from the outside, you’ll need to purchase an additional ticket.

It would be far more prudent to save this money and use it on a visit to the Egyptian Museum or some of the sights in Luxor, where the ornate tombs and gold treasures can still be seen.

Anyway, you’ve arrived at the pyramids and purchased your tickets. The security checks at the entrance are rather quick, and the lineups are short.

Simply keep an eye on your personal items. At one point, cash was stolen from my wallet as it passed slowly through an x-ray machine at the Cairo airport.

You’ll need to pick whether to visit the sphinx or the pyramids first.

The sphinx is located near the entryway, while the pyramids are around a 15-20 minute walk away. I’d recommend taking a camel ride to the pyramids, then returning on your way out and stopping near the sphinx.

Avoid being duped! Giza, like the rest of Egypt’s tourist sites, is rife with scammers and extremely aggressive touts (sales).

Further Reading:  Things To See Around Lake Victoria In Kenya

Simply be tough and inform them that you will not pay until you receive what you agreed to.

At The Pyramids, Camel Rides

If you do decide to take on a horse or camel ride, be sure to negotiate the price and terms BEFORE you board.

It’s not uncommon for touts to attempt to charge absurd prices once you’re already in the saddle and feeling obligated.

Pay neither before nor after your ride – regardless of what they say!

The Egyptian government has set a fixed fee of 50 EGP ($3 USD) for 30-minute camel rides. There is a sign indicating this near the entry, and you can always point to it if you are having difficulty negotiating a fair price with the touts.

You can also request that your guide take some photographs of you on the camel with your camera, but be prepared to tip; an additional 50 EGP is probably sufficient.

Your guide may demand significantly more and may become unpleasant, demanding, or aggressive, but that is how everything works in Egypt.

Simply agree on a price in advance and stick to it. Even the pushiest touts will retreat when they see you will not. This is a common occurrence in Egypt’s daily life and travel.

By the way, fifty Egyptian pounds is an excellent price for a camel ride.

Although riding camels is a little frightening due to your position so high above the ground, it is nevertheless a fantastic experience.

Additionally, you can tell them about the time you rode a camel at Egypt’s Great Pyramids — great stuff!

Hotels in the vicinity of the Pyramids

There are a number of interesting hotels in Giza, all of which are within a 5-minute walk of the main entrance to the pyramids, and all of which have great rooftop views of the surrounding area.

It is suggested to spend at least one night in Giza, as this allows for a more leisurely pace and maximizes your time there.

Additionally, it makes it convenient to attend the Sound & Light Show or simply sit back and enjoy the sunset at Giza.

What Is The Most Appropriate Time To Visit The Pyramids?

Egypt has an arid climate, which means it is hot and dry all year.

December to March are the coolest months, and this is perhaps the most popular season to visit the pyramids, but any month in the spring or fall is fine.

Northern Egypt is significantly cooler than neighboring Middle Eastern countries such as Qatar or the United Arab Emirates.

Photographs of the pyramids can be taken in the morning, but the dust will affect the colors slightly. Around noon is the greatest time of day to photograph the pyramids, when the dust clears and the blue sky can be seen in the background.