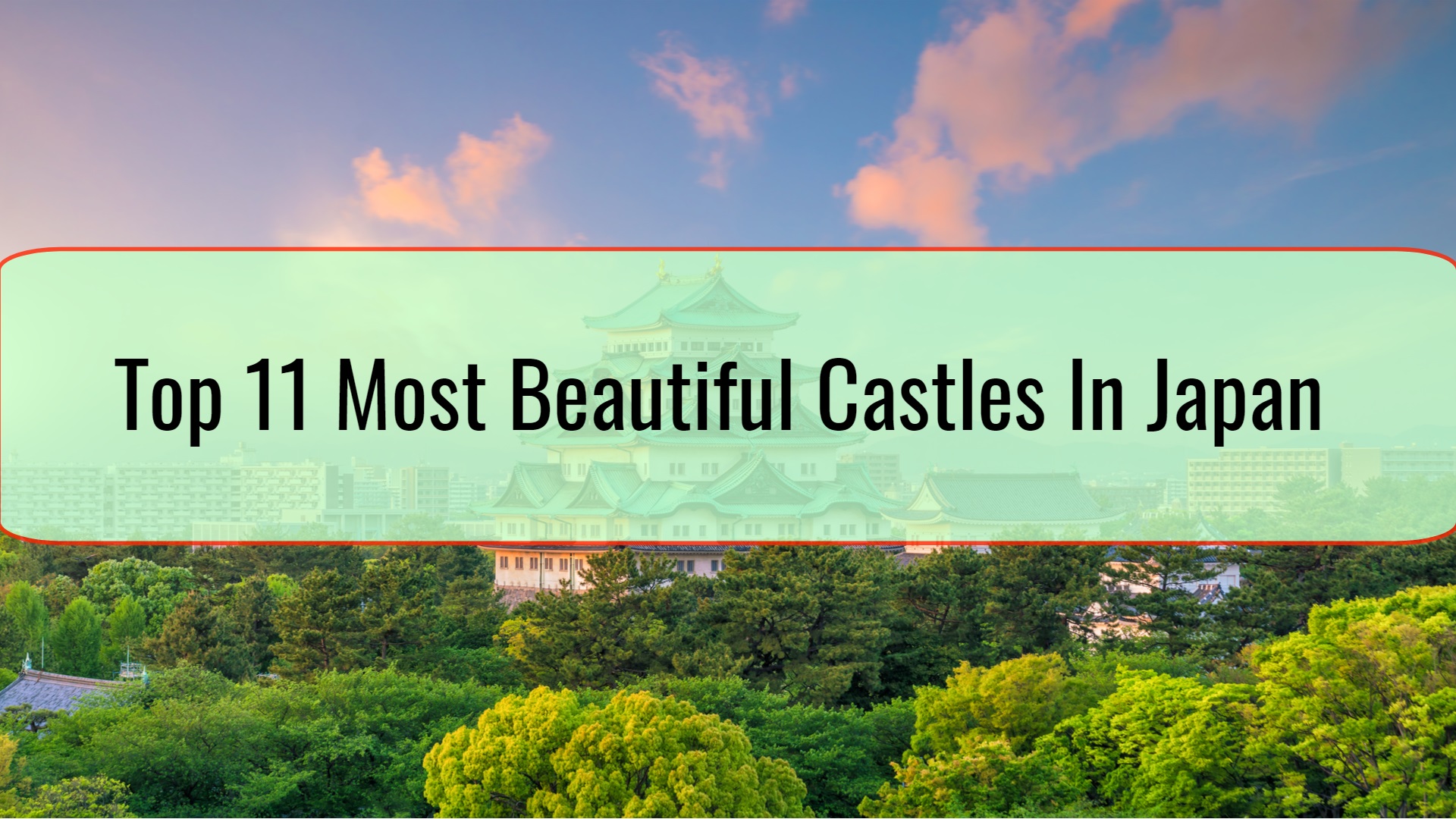 For many centuries, Japan has been torn by war, therefor hundreds of fortresses and castles were built over the years. The castles of samurais and Japanese regional lords, like any other castles, harbor dramatic histories of their own. While many of these castles were destroyed during war years, there are some that are still standing today. Many of them have been restored and can be visited by tourists.

Whereas they look different from the typical European medieval castles, Japan castles are actually quite similar to European ones. Here are some similarities: both types of castles feature large and tall walls built for protection, all have steep stairways, they have portholes for arrows and guns, most have moats around them to prevent the digging of tunnels, and, lastly, all have multiple layers of protection with concentric rings of walls. Another similarity is that most castles were built on a hill or a small mountain for an advantageous view and position. Aside from these similarities, there are definitely some differences as well, particularly the rooftop of the castles that look completely different from the one of European castles.

One thing is for sure though, Japan castles feature breathtaking elements, unique architecture, and they have fascinating stories you’ll love to hear. With that in mind, let’s see the most beautiful castles in Japan. 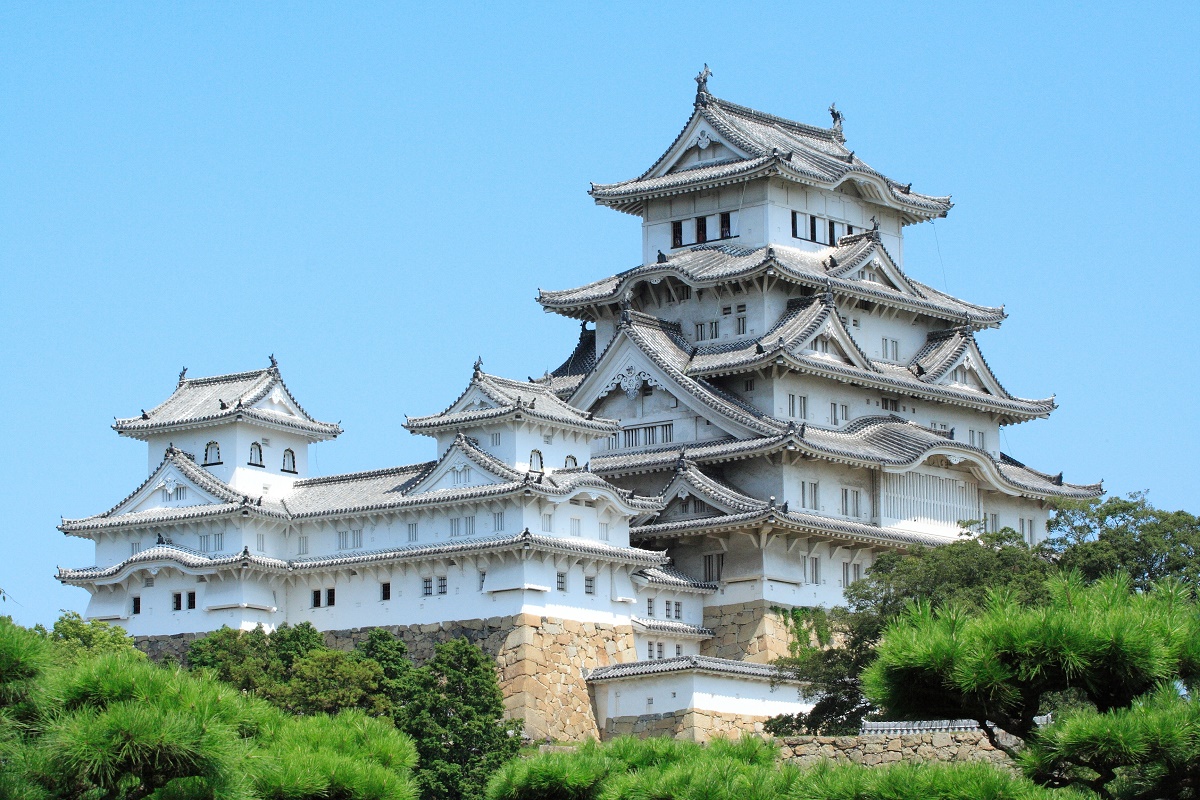 Located in Hyōgo Prefecture, Himeji Castle is a hilltop castle complex that includes 83 buildings. Built by Akamatsu Norimura, a samurai warrior as a fortress, in 1333, the castle has been remodeled many times over the centuries and several buildings were added. 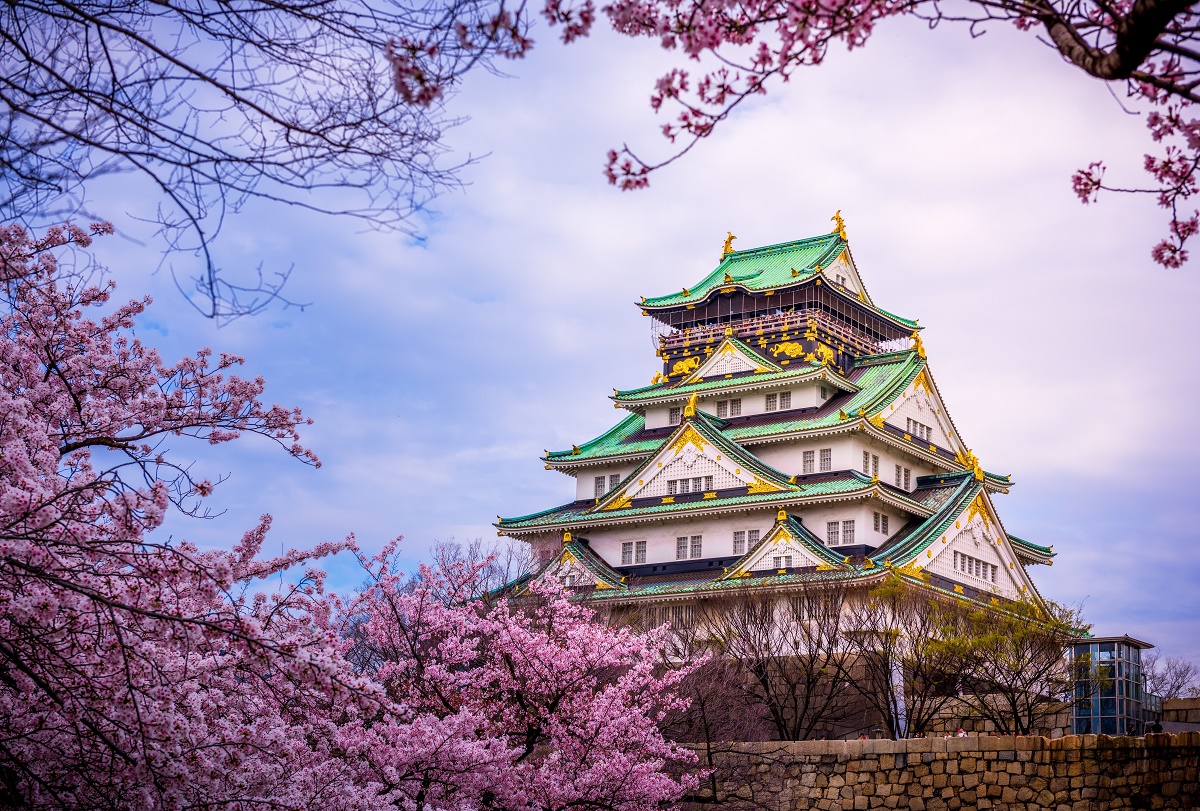 Osaka Castles is one of the most famous and most visited landmarks in Japan. Built by Hideyoshi Toyotomi, warrior and powerful feudal lord, the beautiful castle has eight stories and was constructed on a stonewall surrounded by a moat. The castle was built on the site of a former imperial palace and temple and was used only for a short period of time, however, Osaka Castle played an important role in the unification of Japan in the 16th century. In the 19th century, the castle underwent renovation and was maintained ever since. Every floor of the castles features exhibitions and the castle is surrounded by Osaka Castle Park, a beautiful park that is also worth exploring for scenic views of the castle. 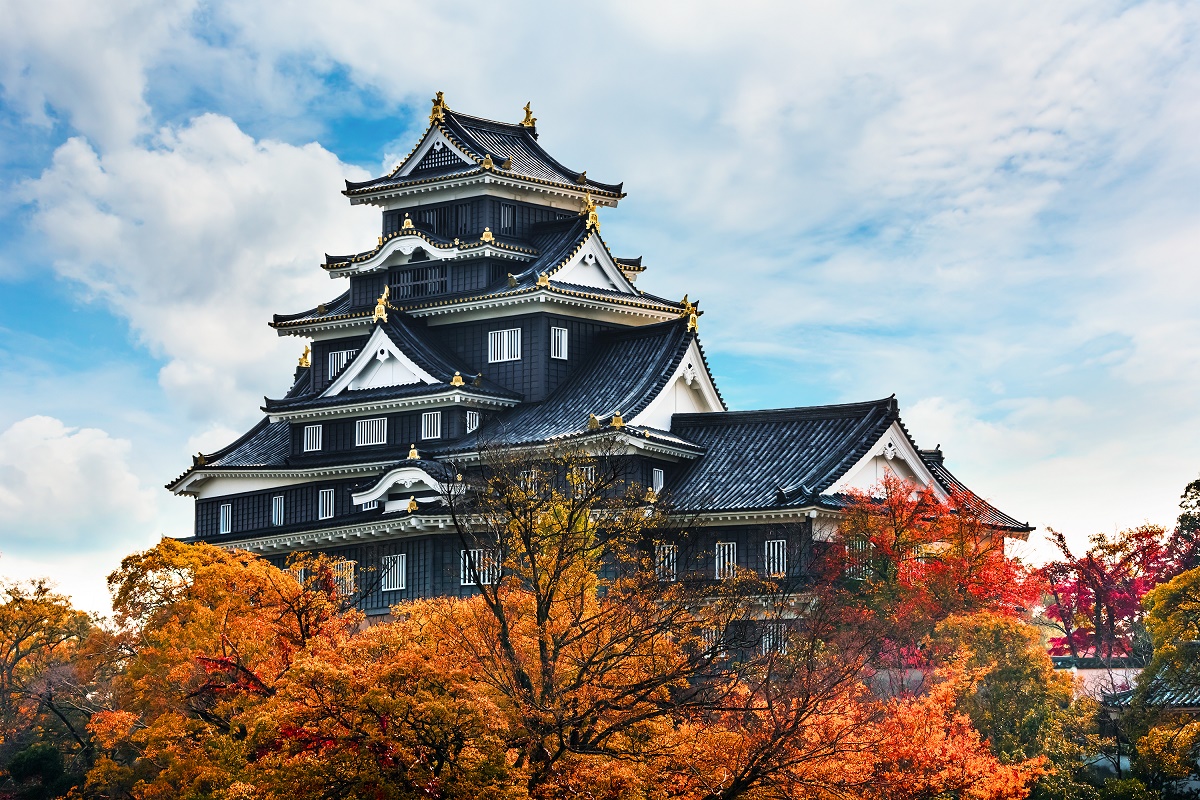 Located in Okayama Prefecture, Okayama Castle is just one of the many castles in the region. The castle is actually close to Himeji Castle so if you’re in the region, you can visit both. While the latter is pristine white, Okayama Castle has black exteriors, thus it was nicknamed the “crow castle”. The rooftop of the castles is just as unique as the castle itself and it consists of gilded tiles and golden fish gargoyles, earning the castle the nickname of “Golden Crow Castle”. This unique castle was built in the late 1500s and the construction took approximately 20 years.

Sadly, the main tower of the castle was destroyed in WWII but the rest of the castle has been restored in the 1960s. Visiting the inner sanctuary is free and you’ll get the chance to learn about the history of the castle through the multiple displays that tell its story. 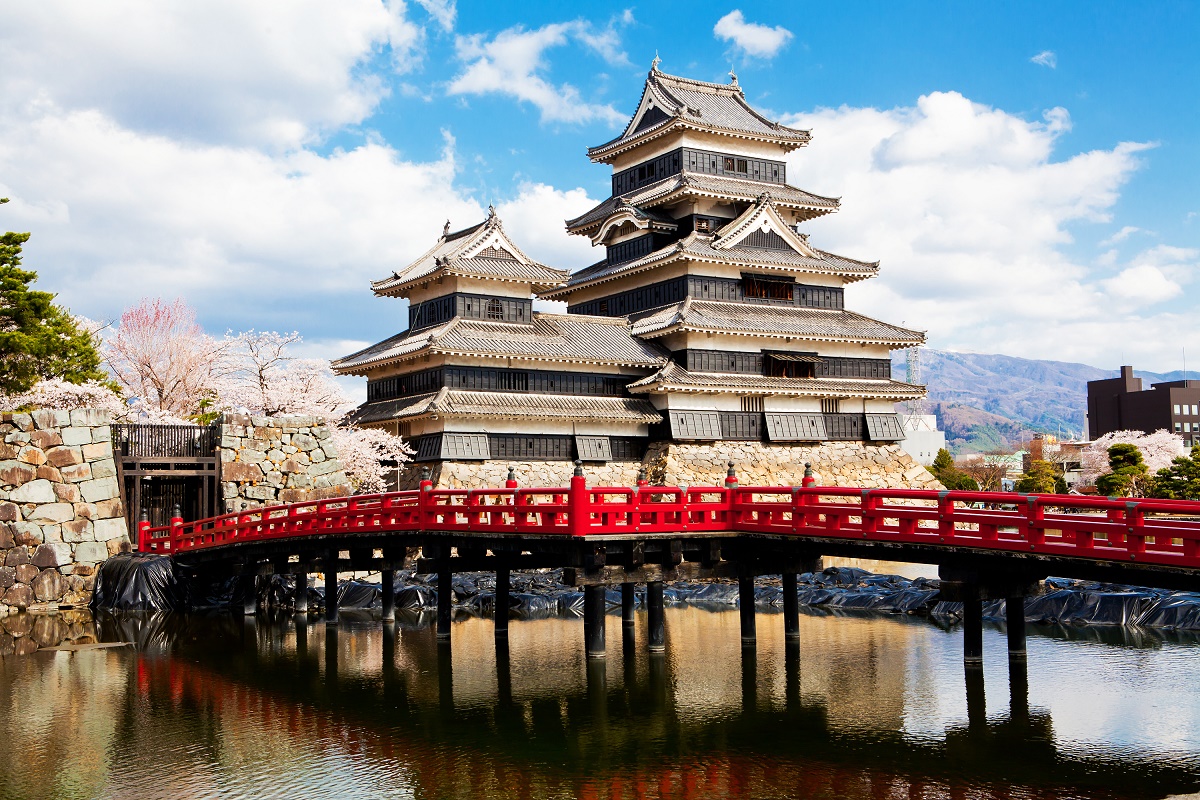 Matsumoto Castle is also known as the “crow castle”. As you probably guessed, the exteriors of this castle are black as the ones of Okayama Castle. Residing in Nagano Prefecture, the castle is close to Tokyo and if you want to visit it, you can take the train from the city. Matsumoto is one of the principal historic castles in Japan and is considered a national treasure. While many of Japan’s castles were built on hills or in the mountains, Matsumoto is a hirajiro, which means a castle built on flatland. The construction dates from the Sengoku period, late 16th century, and it consists of a complex system of walls, a series of moats, and a gatehouse. 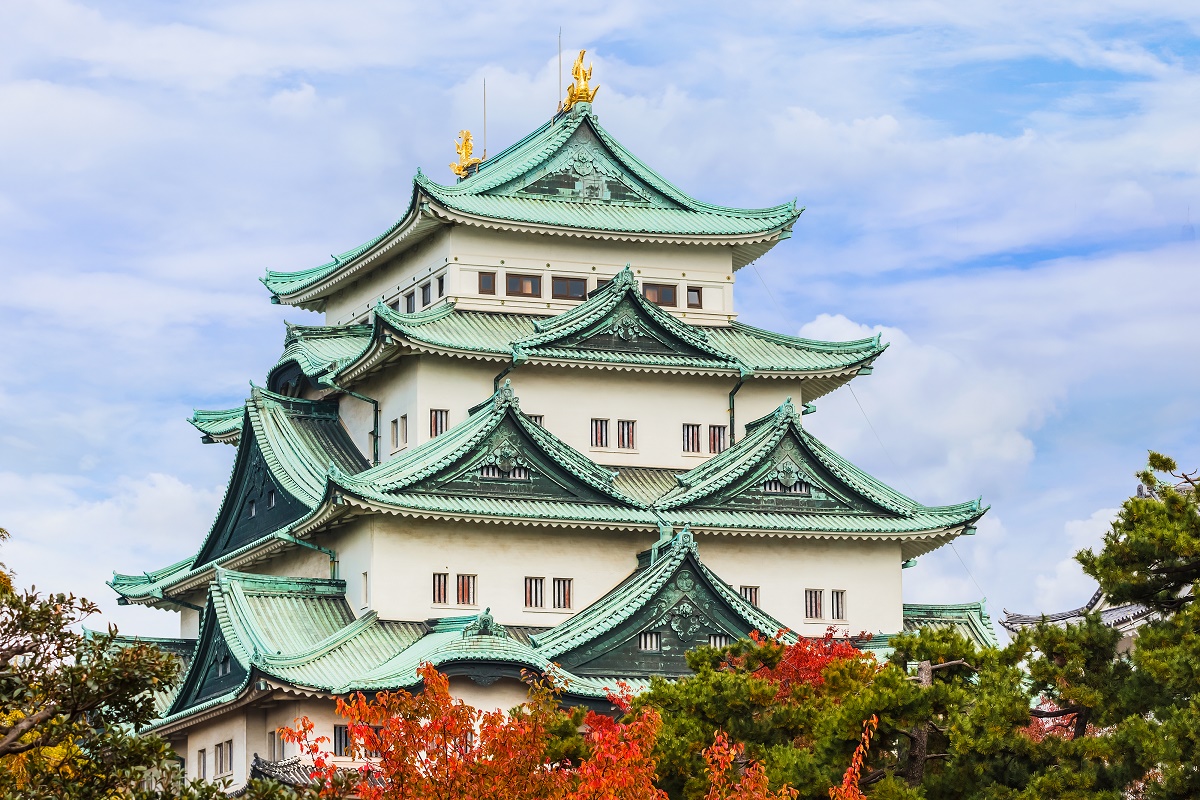 Situated in the center of Japan, the current Nagoya Castle was built in the early 17th century, however, the origins date back to the 16th century. The original castle was named Yanagi-no-maru. Imagawa Ujichika, a military governor, built it in the 1520s and bestowed the castle upon his son. After its completion, the castle was seized by a warlord who changed its name to Nagoya Castle. During the Edo period, the castle town was the most significant one in the area. Used as military headquarters during WWII, the castle was heavily damaged by US army raids but reconstruction started soon after the war ended. Reconstructions continued since then and, in fact, the local authorities plan to rebuild the main tower by 2022. 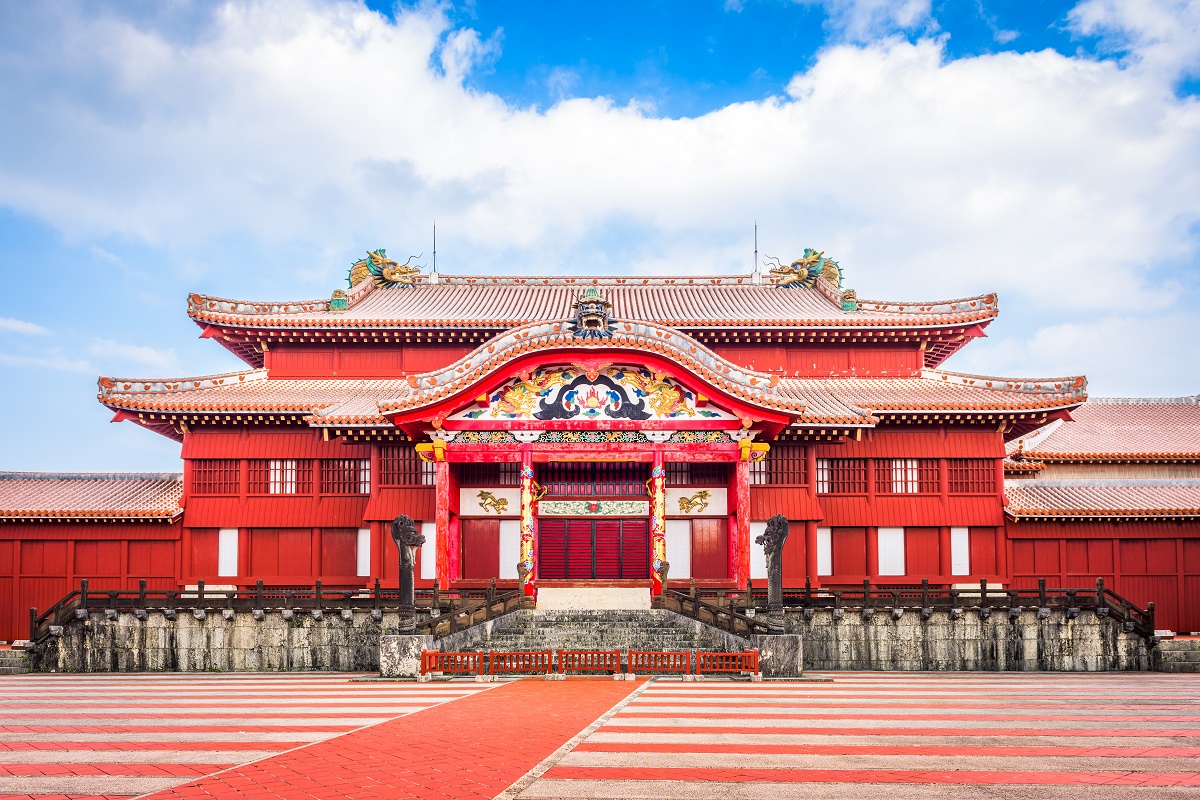 Dating all the way back to 1429, Shuri Castle is located in Okinawa and was the largest castle on the island, serving as an important location for Japan’s East Asia maritime networks. Shuri Castle has a long history and it changed hands many times. Even though the castle was not the strongest from a military and economic point of view, it served as a palace for the Ryūkyū Kingdom. After that, it was neglected for a long period. Efforts to renovate the castle were made by the city authorities but, unfortunately, they couldn’t cover the expenses. The castle burned during WWII and, on the site of the castle, the University of the Ryukyus was established. The university remained there until 1975 even though the reconstruction of the castle began in 1958. The main building and the walls of the castle were reconstructed entirely and since 2000 the castle and its surroundings are designated as a UNESCO World Heritage Site. 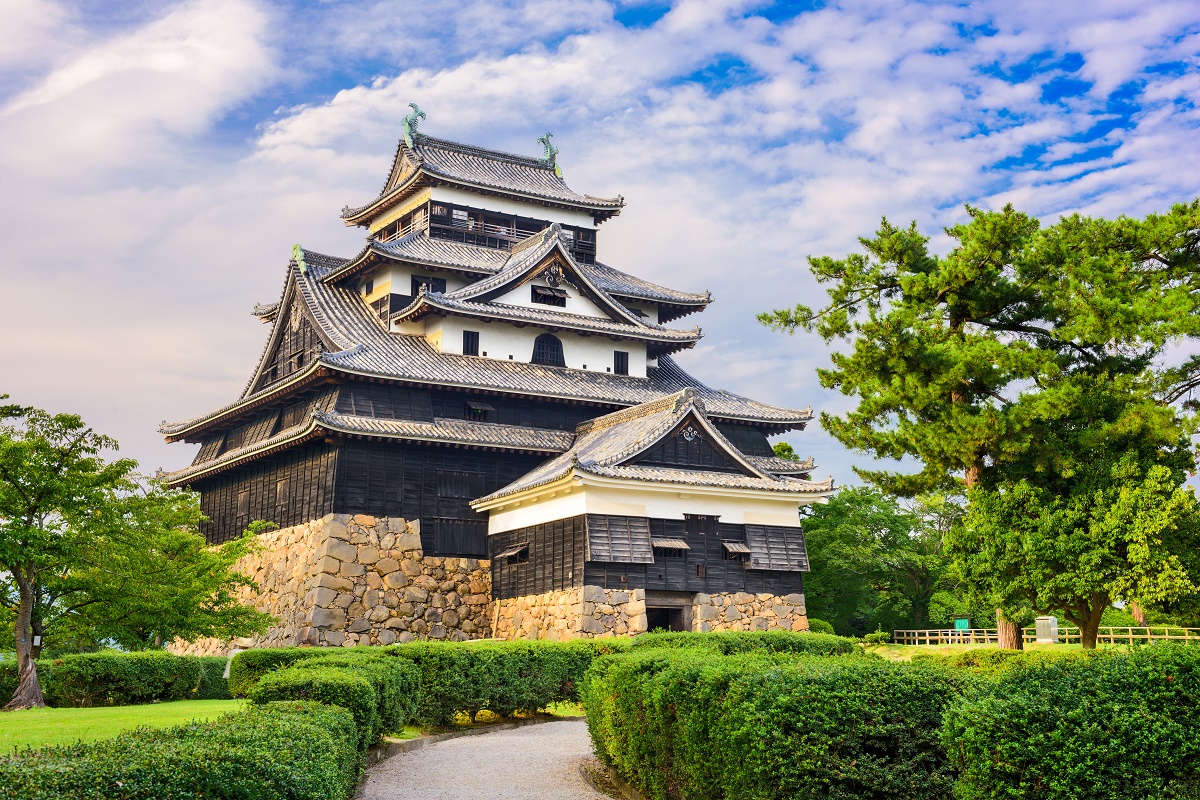 Nicknamed the “plover castle” due to the coloring of the structure that is similar to the plover bird, Matsue Castle was completed in 1611 and, despite being predominately made of wood, it still contains its original wooden structure. There are only a few remaining medieval castles made of wood since most of them burned during wartime. The structure of this one survived because it was built after the great war of feudal Japan so it never actually saw battle. Aside from the structure, the castle still has one of the towers. Matsue Castle is the only remaining castle in the Sanin region and one of the oldest ones in the entire country. 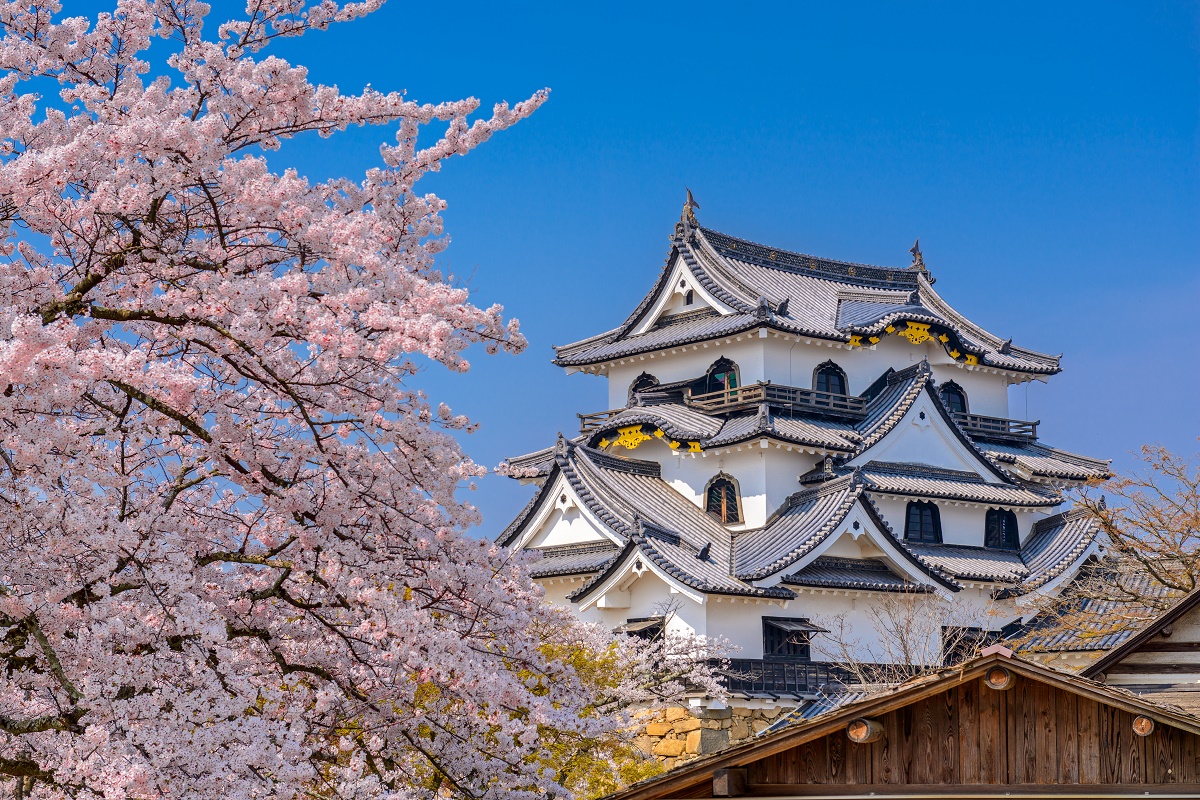 Considered the most important historical building in the entire Shiga region, Hikone Castle was built between 1603 and 1622 and it was in use from 1622 to 1874. During the Meiji era, many castles were dismantled but Hikone Castle wasn’t after the Emperor himself requested for the castle to be spared. Hikone is one of only five castles that are listed as a national treasure and, just as Matsue Castle, it is one of the 12 Japanese castles that have the original structure. The features of the castle, the three turrets included in the castle’s architecture and the stable, are considered Japanese cultural assets. 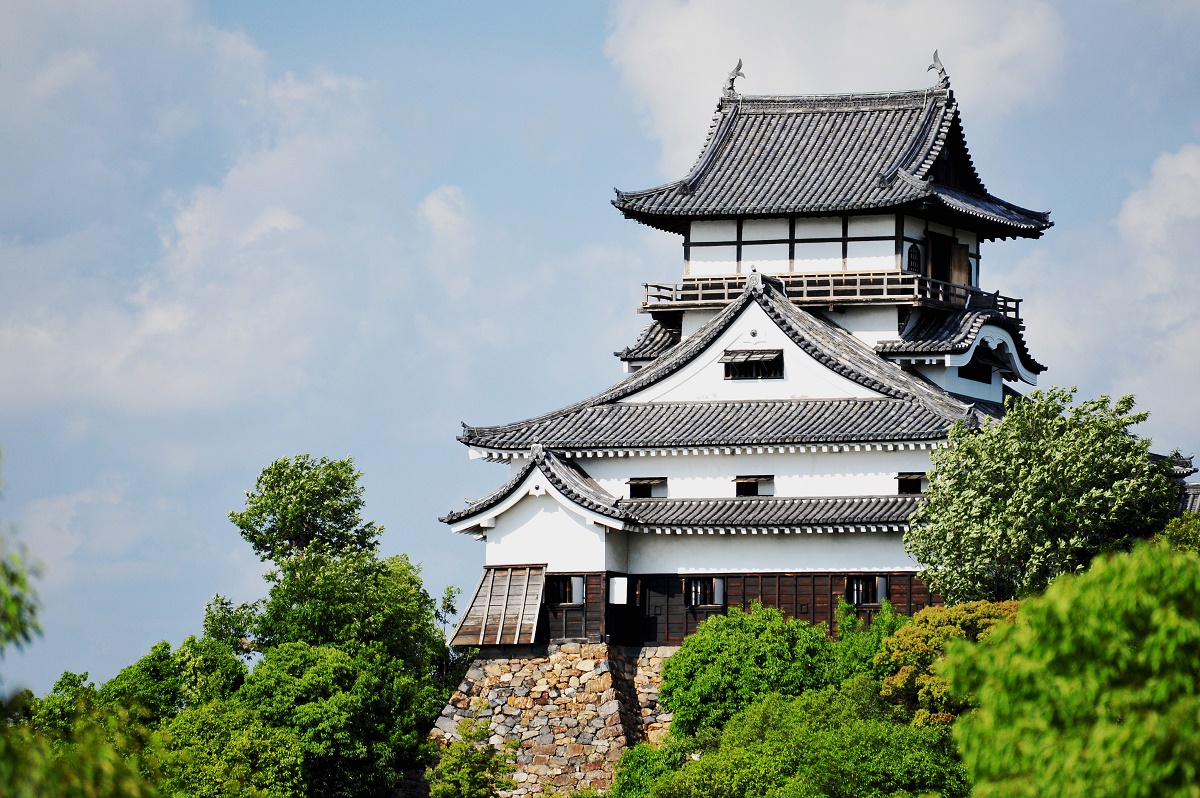 Another one of the 12 original Japanese castles is Inuyama Castle. The castle is located in the city that gave its name, in the Aichi Prefecture and was built in 1440 by Oda Hirochika. It is believed that Inuyama Castle is the oldest castle in Japan and was designated a national treasure. The castle changed hand over the years but it was mostly in the care of the Naruse clan. In 2004, Naruse family gave the ownership of the castle to Aichi Prefecture’s Board of Education. These days the castle consists of three museums: Shiro to machi museum (Inuyama artifacts), Karakuri tenjikan, also known as the Puppet Museum, and Dondenkan, the Flote museum. 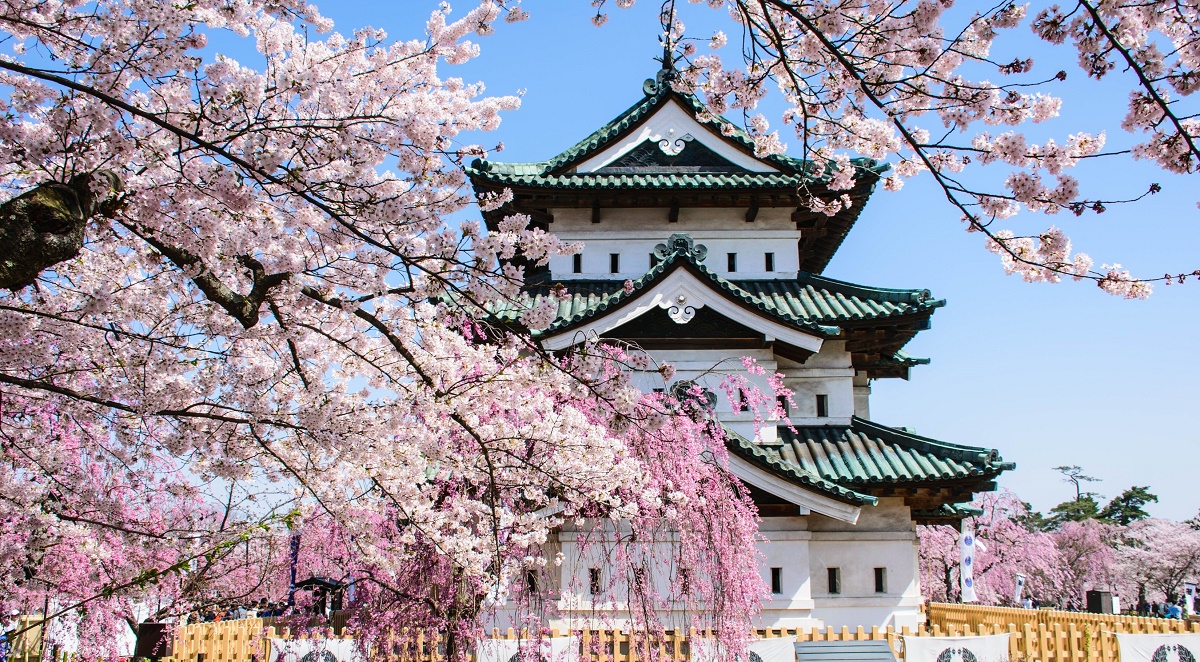 Built in the early 17th century by Tsugaru clan, Hirosaki was destroyed less than two decades after its construction by a lightning bolt that stroke the gunpowder deposit. Two centuries later, the castle was rebuilt and today it’s one of the most visited destinations during cherry blossom season (sakura) thanks to the 2600 cherry blossom trees that were planted in 1903 in the park that surrounds the castle. Hirosaki Castle is also the place where Hirosaki Castle Snow Lantern Festival takes place annually. 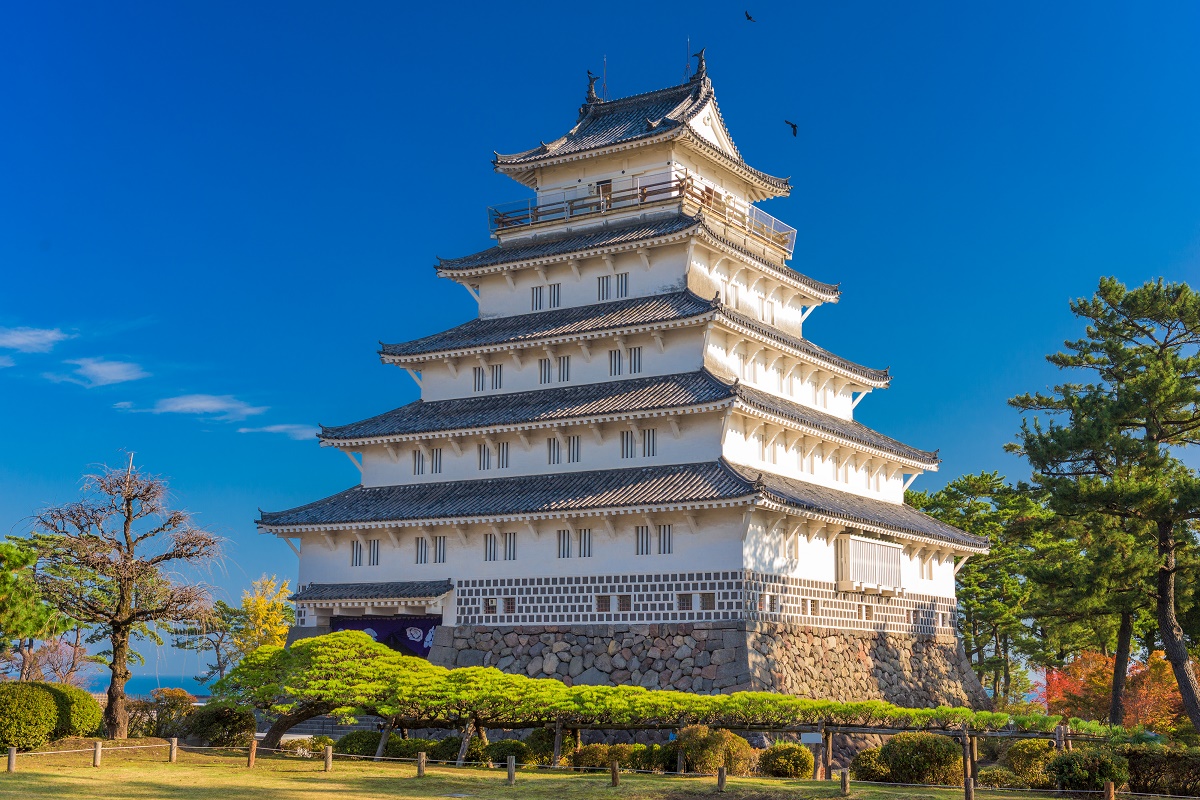 Shimabara Castle is a hirajiro castle situated near Mount Unzen in the Nagasaki Prefecture. Famous for its moats that are very wide and deep, the castle is a museum with exhibits on the history of the region and the local culture. However, back in the day, the beautiful white castle fostered an oppressive regime that raised the taxes people had to pay for the castle and killed many Christians that lived in the territory.